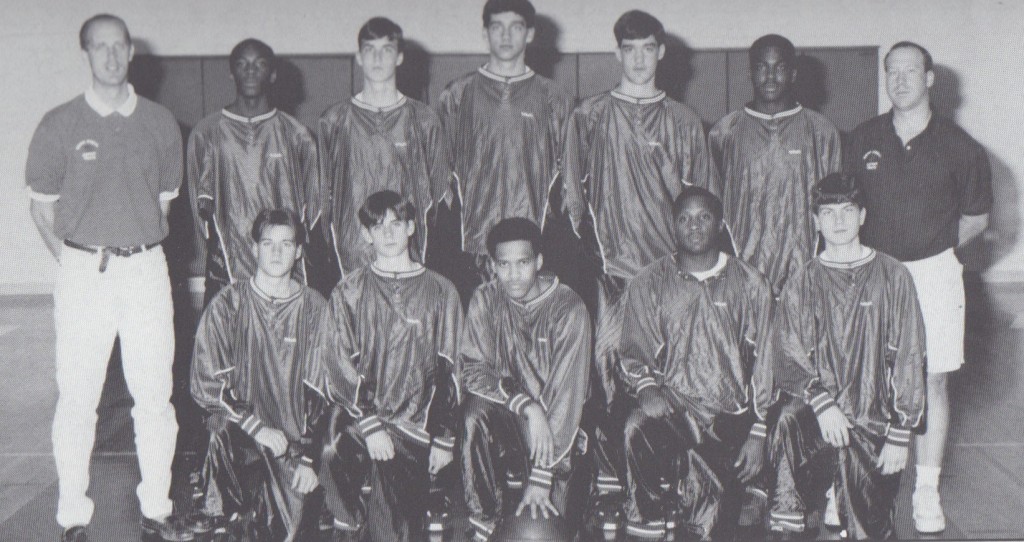 Chuck Collins was a great man and a great basketball coach. Those of you that knew him know the truth in this not-so-profound statement. I had the privilege of knowing him for the final two years of my high school career as he was the head basketball coach at James River High School.  Let me shine a bit of light into this by telling a few stories, two of which are guiding principles that still stick with me today.

Who is George Mikan?

I’m optimistically guessing that maybe 10% of the people reading this post have actually heard of George Mikan, even fewer know why his name is familiar. Who Mikan is really isn’t that important for this story other than to know that he created and taught one of the simplest yet most effective drills for “big men” in the game of basketball. The Mikan Drill is basically a one-man layup drill where the player shoots a layup with one hand, rebounds with the other, then shoots another layup from the other side of the lane with the other hand. Rinse, repeat… indefinitely.

Why am I mentioning the Mikan drill? Because Chuck Collins loved it. Or at least he loved to make me do it; I never really figured that one out. Coach used to make me do this drill at least 3-4 days a week during season and “encouraged” me to make this part of my off-season regimen as well.

One instance specifically sticks out in my mind. We were at Shippensburg University in the summer of 1995 at George Lehmann’s House of Basketball camp. It was probably day 3 and we had just finished up the morning sessions and all of us exhausted players were heading out to lunch. Everyone that is except me. Chuck had arranged a workout with Ken Tyler who was the head coach at Albright college in Reading, PA. Ken was in town to see me workout, I just didn’t know it at the time. So after exhausting all my energy in the morning workouts, Chuck kept me around for another 20 minutes of strenuous workouts so that Ken could evaluate me as a player. Elbow jumpers, triple-threat, etc. etc. Then the dreaded words were spoken, “Bischoff – Mikan Drill!”

Now I remember feeling as if I did that drill for about 5 minutes, which in the world of Mikan drills has to be close to a Guiness Book world record. I snuck a glance about half way through and see Chuck and Ken chatting about old times (I can’t remember the connection they had) while I’m sweating bullets and my stomach is about to turn inside out with starvation. “Why am I doing this drill if they aren’t even paying attention?”, I asked myself. He finally called it off, we shook hands and chatted for a bit. Then I raced to the mess hall to down my usual lunch of some sort of hot ham/cheese sandwich, probably 2-3 bowls of cereal, chocolate milk and likely an ice cream sandwich. I had a ridiculous metabolism at the time, don’t judge me.

At the time I didn’t think much of it other than to loathe any mention of George Mikan, but as I look back and reflect I realize this taught me a number of things. These likely sound cliche, but perseverance and dedication to the task at hand. One of my mantra’s in life is if you aren’t going to do it right don’t bother. Don’t half-ass things just to get it done. Do it right, do it hard, or don’t do it at all. I’m not a perfectionist, just make sure it’s done right. Some would question the difference. Coach Collins would not.

How Does this Relate to the Book of Job?

It doesn’t, at least not on the surface. It was January 1996 and we were in the middle of some of the worst winter weather the mid-atlantic had seen in quite a while. We missed weeks of school at a time, which of coarse meant that we missed and eventually never made up almost a third of our games that season. I was unhappy. My senior season was literally melting away. To top it off, I got bit by a brown recluse spider on the back of my leg and was out of commission for over a week walking around on crutches with a bulls-eye on the back of my leg.

Needless to say, I came into practice after that with a chip on my shoulder complaining about how bad the season was and that we would probably miss the rest of the season. Coach Collins pulled me aside and asked a simple question. “Do you know who Job is?” I looked at him kind of dumbfounded. “Not really”, I responded.

Let me explain. I was in high school and quickly found that I would much rather spend my Sunday mornings sleeping in or watching American Gladiators than go to church. I went to sunday school and church as a young child but as I grew older I slowly lost the connection. So, my knowledge of Job stopped past the fact that it was a book of the Old Testament, somewhere in the middle.

Back to the story – Coach calls another player over and says, “Nehemiah, tell Bischoff who Job is”. Nehemiah quickly retorted, “The patience of Job”. That’s all Coach Chuck needed to hear and sent Nehemiah back to continue his drill . Coach said, “Brian, I want you to go home and read the book of Job and think about how that relates to our current situation.” That was all, and he sent me off to run some drills (probably the Mikan drill, I can’t remember).

I’ll admit now that I didn’t go home and read it. It wasn’t until a few years later that I went back and read it and it taught me another lesson I have kept with me all these years. For those that don’t know, Job is a sad story. Job’s trust in God is tested when his children and all belongings are taken from him. His spirits ebbed and flowed but in the end he never lost faith and all was restored to him. It’s worth the read if you haven’t.

What this story <eventually> taught me is that no matter how bad things get, you have to have faith that things will get better. Things will turn in the right direction. This story and the optimism that it exudes is what gets me through tough times. Patience is the key, and Job had it. I can only hope that anyone dealing with a disease or illness can have the optimism and outlook that Job displayed during his weakest times.

My Ask of You

I am writing you these stories because they have had a profound impact on me. I only knew Chuck Collins for three years but it is amazing the impact such a positive person can have on your life. At the end of my senior year (1996) Chuck was diagnosed with an aggressive form of Leukemia. Just over a year later in July of 1997 he lost his fight. I didn’t handle it very well. Kept it bottled up inside until years later when I slowly started to reflect on Chuck’s impact on my life. I am now glad that I can tell these stories so that others can learn from them.

Help me raise money for the Leukemia and Lymphoma Society so that together we can support ongoing research for treatments and cures for all forms of blood cancers. I am raising money by putting myself through a physical challenge of a new PR in November’s Richmond Half Marathon. Please consider a 100% tax-deductible donation to help me reach my fundraising goals. Every little bit helps and is greatly appreciated.

Be persistent and humble, and God Bless.